Exploring Theravāda's connections to other paths - what can we learn from other traditions, religions and philosophies?
Forum rules
Post Reply
58 posts Both born in almost same place (when you consider the size of the subcontinent). Buddha at Bihar-Nepal border in Lumbini or Kapilavastu, Mahavira at Vaishali in Bihar province about 150 miles south west of Lumbini.

The times of Gautama’s birth and death are uncertain: most historians in the early 20th century dated his lifetime as circa 563 BCE to 483 BCE, but more recent opinion dates his death to between 486 and 483 BCE or, according to some, between 411 and 400 BCE. However, at a symposium on this question held in 1988, the majority of those who presented definite opinions gave dates within 20 years either side of 400 BCE for the Buddha’s death. According to Pali scholar K. R. Norman, a life span for the Buddha of c. 480 to 400 BCE (and his teaching period roughly from c. 445 to 400 BCE) “fits the archaeological evidence better”.(Wikipedia)

Buddha died at age of 80 at Kusinara, Uttar Pradesh province.

Mahavira died at age of 72 at Pawapuri, Bihar about 200 miles east of Kusinara.

Both are Sramana schools.

Both schools share the word arahant when referring to liberated ones.

Both assert right mind is superior to worship. Both reject the idea of a Creator God. Both speak of finding peace through self-control and renunciation. 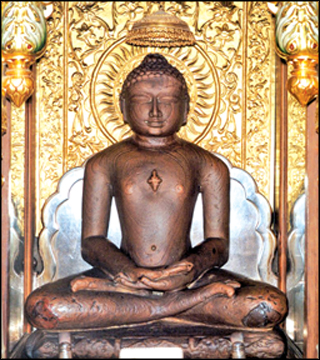 (both statues chosen from Indian art; Korean and Thai Buddhas are different from Indian Buddha)

Either they were the same person or if Buddha was born about 20 – 30 years after Mahavira, he must have heard stories of Mahavira and emulated him by leaving his home. Buddha’s extreme asceticism in early years bears hallmark of Jainism which is very austere and puts lot of stress on inflicting pain upon the body (the Jain monks do not shave but tear out month old beard; it is horrible to watch and they are absolutely silent when they do it). Buddha it seems to me began as some sort of believer in Jainism and then founded a new school because he did not like going overboard with austerity.
"The struggle itself toward the heights is enough to fill a man's heart. One must imagine Sisyphus happy.”― Albert Camus
Top

Thanks no mind.
So what are the main differences in teaching?
I am more interested to know about Nibbana and Kamma.
“As the lamp consumes oil, the path realises Nibbana”
Top

SarathW wrote:Thanks no mind.
So what are the main differences in teaching?
I am more interested to know about Nibbana and Kamma.

They do not have Nibbana but Kevala Jnana (pure or absolute knowing) which results in Moksha.

In Jainism, Karma begins with material or dravya karma -- submicroscopic specs which pervade everywhere in Universe and when they adhere to human consciousness gives rise to bhava karma -- emotions and feelings.

Karma in Jainism
"The struggle itself toward the heights is enough to fill a man's heart. One must imagine Sisyphus happy.”― Albert Camus
Top

What happens to a person in Kevala Jnana dies?
“As the lamp consumes oil, the path realises Nibbana”
Top

SarathW wrote:What happens to a person in Kevala Jnana dies?

Instead of quenching your thirst a drop at a time, let me hold your mouth under the waterfall

Jainism
"The struggle itself toward the heights is enough to fill a man's heart. One must imagine Sisyphus happy.”― Albert Camus
Top

Mahavira and the Buddha were contemporaries. I don't think theres any evidence they ever met, but The Buddha did meet students of Mahavira and a couple of them, according to Suttas, asked to ordain with the Buddha. There are significant differences in the teaching but probably Jainism is the closest extant religion to Buddhism.
Top

I agree with the article's conclusion. I think all these practitioners of liberation were on the right track and understood the true goal and the Buddha is the one that achieved it properly. So, there are similarities between what the Buddha taught and Jainism, but they can't all be right, since there is fundamental differences between some of these schools. Some of these ascetic practices do seem a bit too extreme and don't really make sense to me...I mean, why would ripping out your beard in pain lead to liberation? The Buddha eventually realized that this wasn't accomplishing anything and went a more balanced way.
Top

The major source for this Jain Buddhist connection is Bronkhorst, Two traditions of meditation in ancient India:

Let me quote a piece of a review of another work, The origins of Buddhist meditation by Alex Wynne, which outlines the two major views of which teachings influenced the Buddha:

The Origin of Buddhist Meditation by Alexander Wynne analyses the Ariyapariyesana Sutta’s account of the Buddha’s study under his two meditation teachers. He concludes that they were historical persons, that they taught the Buddha practices that are described in certain Brahmanical texts, and that, while the Buddha rejected the teachers’ views of liberation, vestiges of their influence are evident in his later teaching.
...
For Bronkhorst, the meditative ‘mainstream’ of the Buddha’s world was not the practice of Brahmanical yoga but the self-mortification of the Jains and others which, according to texts such as the Mahasaccaka Sutta, the Bodhisattva undertook after he left the two teachers. In his recently translated book, Greater Magadha, Bronkhorst argues that this was the main practice of the shramanas (the wandering mendicants whom the Bodhisattva joined when he left home) and that the Brahmins (the other fulltime religious practitioners of the Buddha’s world) were an alien group whose teachings were irrelevant to his quest. Where Wynne shares with his colleague Richard Gombrich the belief that ‘The central teachings of the Buddha came as a response to the
central teachings of the old Upanishads,’
Bronkhorst argues that the Upanishads in fact postdate the Buddha and that the only influences on him were non-Brahmanical. Wynne believes that the story of the two teachers in the Ariyapariyesana Sutta is authentic while the Mahasaccaka Sutta’s account of the austerities are a later interpolation, whereas Bronkhorst thinks that the two teachers are bogus while the austerities are authentic.

Self-taught poverty is a help toward philosophy, for the things which philosophy attempts to teach by reasoning, poverty forces us to practice. — Diogenes of Sinope

I have seen all things that are done under the sun, and behold, all is vanity and a chase after wind — Ecclesiastes 1.14
Top

Are the similarities between Buddhism and Jainism, including between their founders, close enough as to put either religion into question?

What if the Buddha never existed, and instead was based on Mahavira?
Non-violence is the greatest virtue, cowardice the greatest vice. - Mahatma Gandhi

Santi253 wrote:Are the similarities between Buddhism and Jainism, including between their founders, close enough as to put either religion into question?

What if the Buddha never existed, and instead was based on Mahavira?

After Buddha, Buddhism and Jainism mutually influenced each other (if only by opposing each other) for some centuries. It is a fascinating topic for discussion. However, they are clearly quite distinct with fundamental differences.
Top

Exactly the same as you had before.
Top

Exactly the same as you had before.

No, because the prospect of attaining Nirvana would be based on a falsehood.

It would be a delusion to think that we can attain Nirvana if there wasn't a historical Buddha who attained Nirvana and taught the path to Nirvana in the first place. It would be just as delusional as believing that Jesus died for your sins if Jesus never existed.

I agree - and the Mahavira stuff/Jain similarities kind of freaks me out. I want to do some more research and get to the bottom of this, but I'm inclined to believe that the Buddha did exist, and was perfectly enlightened. I'm inclined also to think that other teachers thought/claimed they were, but were mistaken.

I have heard it repeated many places that Nigantha Nataputta is the same person as Mahavira - Does anyone happen to know the basis for this conclusion? Thanks.
Top
Post Reply
58 posts