I read this story in Thai Dhammapada.. I can't find online in English..so I must post this story with my Thai-English..'Thinglish'. 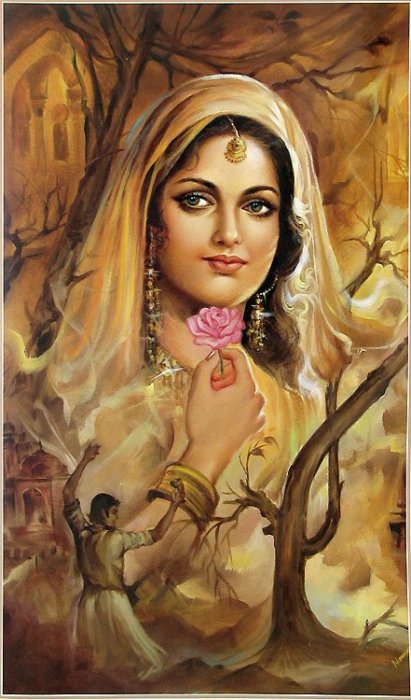 Once upon a time, Visakha, the great upasika, went to the temple in Savatti. It rained that day and the monks bathed in the rain naked. Visakha thought about giving robes to monks as bath-robes. Visakha went back home to prepare bath-robes for all monks and came to give them to the Buddha. Then the Buddha preached about the great benefits of robes-dana. And he told the story of Amaidhasi...the slave girl.
-------
In the time of Kassapa Buddha, there was a very poor woman named Amaidhasi. One day, she saw people bring robes for the monks. This inspired her to do the same, but she was just a poor slave. Her mother told her to ask her boss for an advance on her paycheck. She asked, but the boss refused. She was so sad because she thought that since she didn't give dana or perform meritorious deeds in the past lives, she was born poor in her current life.

She decided to change that by giving the robe off her own back as dana to the monk. She gathered some leaves and sewed them together to cover her body. She cleaned her only robe and took it with flowers,candles,incenses and went to the temple to make an offering to the sangha. She made a wish that her robe-dana would bless her, so she would never be born poor again until she attained arahatship.

Because of her robe-dana, her prayers were answered.7 days later King Banthumaraja, while touring the city, saw Amaidhasi carrying a big bundle of woods walking along the road, he loved her at first sight. The king took her to his palace and made her his queen.

------------
Then the Buddha told Visakha and her people that in the far far future, Amaidhasi's last life, she would meet the Metteya Buddha and attain Arahatship as she wished.
*******

Beautiful and inspiring! I got some great messages out of this, and you’re English is not bad!
"By depending upon this boat like human form,
we can cross the great ocean of suffering.
Since such a vessel will be hard to find again,
there no time to sleep, you fool!"
Shantideva- Guide to the Bodhisattava's way of life
Top

charlotte wrote:Beautiful and inspiring! I got some great messages out of this, and you’re English is not bad!

Thank you very much for thinking that my Thinglish not bad

A Carribean rose for you